Just added to your cart

From the Pitch to the Pulpit

Gavin Peacock is a former professional soccer player in England, playing 18 years for some of the top clubs in the English Premier League. After retiring in 2002, he began doing broadcasting work, but six years later felt a pull to ministry. He is now an associate pastor at Calvary Grace Church in Calvary, Alberta, as well as a speaker and author. Below, he shares about his faith journey and how he aims to see Christ increase in his life.

I was brought up in a footballing family, as my father was a professional footballer. All I ever wanted to do was follow in his footsteps. As a small boy, I was brought up around the smell of the dressing room, match day on a Saturday, and the roar of the crowd. I’ve got a picture in my mind of my dad’s match days — sitting in the old stadium, the smell of pipes and cigars, and watching my dad burst through and smash a goal in. During the school holidays, I remember my dad, who was a great dad and a good coach, taking me to the team facility. I would scamper around the training ground, watching the guys play and having chats with the players. They were friends to me and took an interest in me, encouraging me in my own dream of being a footballer.

I was kicking a ball as soon as I could walk. My dad was the type who encouraged us not to be afraid to try things and lose once and a while. I would go to the park and play with the other boys, and my dad recognized that even though I wasn’t as big, I had good control of the ball. He also taught me a lot about character. I could not only control the soccer ball, I could control my temper. They go hand-in-hand.

When I was 15, I represented England while playing as a school boy, so I knew I had a good chance of going pro. I worked hard at school but football was the goal. I left school at 16 and achieved the goal of becoming a pro. In all, I played 18 years in more than 600 games and scored 135 goals. I played for some of the greatest coaches in the world and with some of the best players in the world.

In 2002, I retired and went into media work, analyzing games and broadcasting to millions on the British Broadcasting Corporation. But in 2008, I gave it up to prepare for church ministry. I’ve been a Christian since I was 18, but I never sensed a call to ministry until about 2006. So I went all the way from the pitch to the pulpit because there’s a greater glory in life besides football, fame and fortune.

“Suddenly, as a new creation, having been born again, I saw football fall away from being my god and into its right position.” — Gavin Peacock

I wasn’t brought up in a Christian home. My parents were great but they weren’t Christian. The problem was, football was my god. If I played well, I was up; if I played badly, I was down. But I had made it — I achieved the school boys’ dream. I had everything the world tells you that you need, and yet I wasn’t totally satisfied.

I was living at home at the time when my mom said, “I’m going to pop over to the local church,” which was literally 100 yards from our home. I went along to keep my mom company, and the minister said to me that they would be having a youth meeting at his house Sunday night, and that there would be kids my age there. He invited me so I went. When I pulled up to the meeting that night in my sports car, I got out and walked into this living room where sat a half-dozen young people who weren’t in the in-crowd like me, who didn’t have what I had. But when they prayed and when they talked about Jesus Christ, they had a joy and a reality that I did not have.

Over the next couple of weeks, I heard the minister unpack the Good News of what God had done to save sinners like me. I realized then that my biggest problem wasn’t to gain the approval of a crowd on a Saturday but to be in a right relationship with the Living God — against whom I had sinned, under whose judgement I stood. And yet, because of His great grace and mercy, He had provided a sacrifice of sins, forgiveness and atonement in the Lord’s own Son, Jesus Christ, through His death, burial and resurrection. I was given repentance and faith, and I believed.

Suddenly, as a new creation, having been born again, I saw football fall away from being my god and into its right position. I think I then became the best kind of footballer I could be because it wasn’t everything to me. I still worked hard and played hard, but because my identity was in Christ, I was the best footballer I could be. 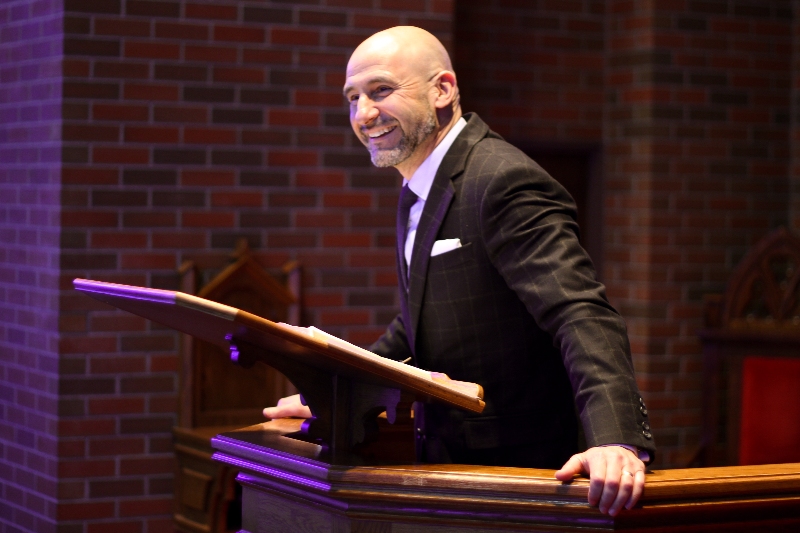 As a Christian professional athlete, there are unique pressures you face because your life is very public, especially if you are very public about your faith. You also experience massive highs and massive lows in a few days’ time. The key is that your identity must be firmly rooted in Christ and not sport. That is the big battle of the Christian life — to know who you are in Christ and not who you were in the old life.

My sense of worth was no longer tied to my performance on Saturday but was solely in Jesus Christ, and that helped me ride the ups and downs and scrutiny of a very pressured and public career in football. You need to be in a good church, you need to have a good devotional life in the Word and prayer daily, and you need good mentors around you who can speak into your life. With those three things, combined with finding a good wife, I was able to ride through my football career with Christian faith intact while facing challenges along the way.

In the U.S., I always saw that Christian footballers were able to be very public with their faith; in England, not so much. There were a few Christian players and chaplains in football around me in my day, but not many. I had the privilege of having two or three chaplains at the clubs I was at and I was involved with Christians in Sport UK, which is similar to Athletes in Action in America. I once started a Bible study that gathered whatever Christian footballers we knew in the London area. Graham Daniels, the Christian in Sport evangelist, would give a message after which we would sing and pray together. That grew and more of those meetings sprung up. It’s a model that Christians In Sport implemented around the country.

One of my all-time favorite highlights came from one of my roommates during my footballing career, a really funny, good-humored guy. I liked him very much, and when we both moved away we kept in touch a bit. One night, I got a text from him that said, “Gavin, you’ll never believe this: I’m reading my Bible every day now and I’ve started to go to church and pray.” Long story short, he’d come to the end of himself. All of the stuff he thought would give him satisfaction, and heal broken relationships from the past, and give him true purpose, were not satisfying. A few Christian friends of his invited him to church to hear what the Bible had to say about us all, and what God has done through Jesus to save people for Himself, and he became a Christian.

He was someone about whom I thought, “No way.” But that goes to show you that as Christians, we don’t convert, we just share the Gospel and let God do the miracles. We ought not to be ashamed of it at all. It’s the great news that we just have to present unashamedly and clearly, and then pray that God will do the work. He may do it today, He may do it in 10 years, or you might never know. Jesus says in John 15 that every branch must bear much fruit, and you may think, “What fruit have I born?” It’s the fruit of Christlike character, but it’s also the fruit of evangelism. You may never know how God will use your words to save someone else.

“If people look at my life, I’d want them to see that football is great, but Jesus is greater. He is whom all of us need in this life.” — Gavin Peacock

After my football career, my media career was going really well. But in 2006 my wife got very ill, and as is often the case in the middle of a trial, God used that to refocus my life. I was in the epistles, reading in 2 Timothy 4, where Paul is called to preach the Gospel in and out of season for the sake of Christianity, and I realized what a charge this is to preach God’s Word and shepherd God’s people! “Maybe this is something I should be doing,” I thought.

I had always been a leader on my teams and then in communications with BBC, so I talked with my church leadership. They recognized some character qualities and gifts that would fit, and they gave me the opportunity to do some preaching. Then I started to study the Bible at Cambridge University. I was still doing TV stuff on the weekends, and then on Monday I’d drive up to Cambridge where all I wanted to do was study the Bible. As soon as I started to study, I told my wife that I wanted to give up my second career and focus on preaching the Gospel.

God has continued to open doors since. Today, I get invited all over the world to preach and also teach on things like family, fatherhood and being a husband. I also share my testimony to unbelievers. Because people think I gave up something — something that is everything to many people: a professional soccer career and then a successful career in media — people are intrigued by what I have to say.

No one wakes up and says they don’t want to have purpose or identity. The world is struggling with identity all the time. Only God can provide that for anyone. He made us for Himself and until our hearts find their place with Him, we will never find true satisfaction and identity. Only God can deal with our biggest problem — sin.

Any man wants to leave a legacy, and my family is my legacy. I’ve had a great bit of different roles in my life as a soccer player, as a broadcaster on TV, and even as a pastor, but my greatest role is to be a Christian husband and father. My family will be my letter of recommendation to the Church, because how I’ve shepherded my family will be how they shepherd the people in the Church.

If people look at my life, I’d want them to see that football is great, but Jesus is greater. He is whom all of us need in this life.